Someone asked, "What is the difference between spirituality and religion?  Do I have to leave my religion?"
First of all, there is nothing called religion.  Religion never existed before humans came on earth. It was designed by man as a form of conduct among human beings. God or the power of consciousness exists throughout everything in nature. Every soul is one and interconnected with each other. 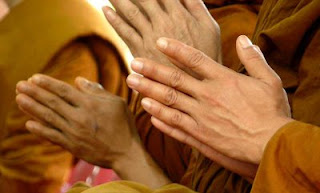 So, you don’t have to leave your religion.  Spirituality lives in every religion. All religion basically preach the same instructions to life.  However, spirituality and the understanding of spirituality is higher than any doctrines. In religion, the attempt to absorb and cultivate good exists while discarding the bad but true spirituality is the awareness of good and bad and being unaffected through good and bad, highs and lows. One who understand true spirituality will never adopt or admonish his or her religion. They will neither adopt of admonish any other religion. One never leaves one’s own religion nor leaves other religions. This is because the awakened person knows and sees the universal force in through all things and so through all religions.

The true one will be comfortable accepting all doctrines and teaching of all religions and enlightened beings. Here, truth does not differ with all enlightened beings and masters but they were just the same truth expressed in different forms. Religion was formed by man initially with the intention of creating harmony, peace and unity amongst us and never as a dominance or fight for supremacy.  There are no tittles to be won by any religion because they already have won the tittles of working on the truth and establishing this truth. It’s only ignorance that caused barriers and separation. An awakened being is not ignorant but full of wisdom, wiser than the mighty ignorant.

When you follow spirituality with all your heart and soul, you are bringing good name to your own religion, whichever it is, for this is what every religion speaks of.  Do not stop with any man-made rules in religion if they are beyond what truth in an unbiased form is. There is no necessity to oppose anything that does not fall in with the highest good of all, for a wise man ignores ignorance. An awakened being does not notice such small things because there are higher and bigger things of importance to him or her.  Until one does good in the true spirit to everything and everyone, there will be no opposition from any religion; it is just our myth.  Even religion actually sees goodness for the highest good of all more than any doctrines that were once placed with the sole intention of building ethics and nothing that we see today as loopholes or rigid laws.  So, when one works on true spirituality, one works on his or her religion too. Both are one for a seeker.

Email ThisBlogThis!Share to TwitterShare to FacebookShare to Pinterest
Labels: Holistic, Self help, spiritual

Make Me a Channel of Your Peace